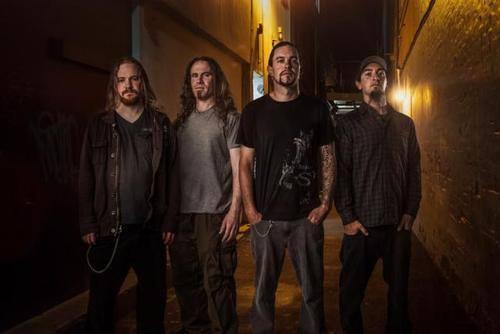 Psycroptic is a metal band from Hobart, Australia. The band is currently signed to Nuclear Blast and has so far released five full-length albums. They formed in 1999 by brothers Dave (drums) and Joe (guitar) Haley who had previously been involved in a band called Disseminate. That group had recorded a demo in 1998 before disbanding. Shortly afterward, the Haleys created Psycroptic with Cameron Grant on bass and vocalist Matthew Chalk, who soon after became a drummer with established local death metal act M. S.I.. With assistance from the Tasmanian Council of the Arts, the band recorded 'The Isle of Disenchantment' that was designed only as a demo but the result impressed the band enough to release it as a proper CD. Shortly after it was released the band was invited to play shows in Melbourne and in late 2001 they featured at the annual Metal for the Brain festival in Canberra for the first time, later also appearing in 2003 and 2005. The band recorded its second album 'The Scepter of the Ancients' in 2003 for release through American label Unique Leader. The same year the group played its first full Australian tour in support of American death metal band Incantation. The Haley brothers also joined Sydney-based industrial black metal band The Amenta during this period and recorded the album 'Occasus' with that group. Dave Haley also worked on an EP called "Atom and Time" with the Hobart black metal band Ruins. The year 2004, was a breakthrough year for the band as they played a second Australian tour, this time with Deeds of Flesh and then headed to Europe for a wide-ranging tour with Swedish bands Dismember and Anata. However, Chalk expressed reluctance to undertake the journey so his friend Jason Peppiatt from another Hobart band, Born Headless, was recruited to play the shows in his stead. On returning to Australia, Psycroptic played two legs of the Metal for the Brain in Canberra and Brisbane, and a final show in their hometown of Hobart. Following this, disharmony between the band saw Chalk leave Psycroptic, and Peppiatt replace him. Since his departure from Psycroptic, Chalk has continued to play drums with M.S.I. as well as a doom band called Space Raven and act in the vocal role in a number of other groups that includes Mephistopheles, playing bass in Born Headless and several other projects. They then did a handful of Australian dates with Hate Eternal before heading in to begin work on their third album, 'Symbols of Failure', their first for Neurotic. The album was released in 2006, and was followed by another European excursion with acts like America's Nile and another Australian tour followed, this time with Cannibal Corpse. 'Work began on the follow-up to Symbols of Failure' in early 2007 before some European shows with Deicide. Joe Haley collapsed after one show and suffered a seizure. He later recovered but the last few dates for the tour were cancelled. On 10 June Psycroptic featured at the Come Together Music Festival in Sydney. The Haley brothers seem to have since put their membership with The Amenta aside to concentrate on Psycroptic; however Dave Haley joined Blood Duster in September 2007. Both Dave and Joe are currently performing with Hobart based black metal band Ruins.
Claim this page
Areas:
South
Artist genres:
Metal / Hardcare / Prog
Artist type:
Bands